The season for fly fishing was closed in France so the thought of catching any European fish had been blocked from my mind. Still, when I am around my good friend, Eric Bacon, there is no lack of discussion on the topic of fly fishing.  Eric had invited us to stay at his house in Andernos Les-Bains, just outside of Bordeaux, France, should we ever visit. 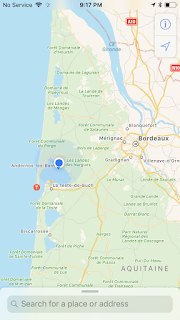 Eric did not hold back when it came to hospitality. My family and I were half a world away, but felt right at home. When people visit France they say the best food is in Paris; however, I would have to say that it was right there in Eric’s kitchen. A lavish dinner party that included Eric’s best fly fishing friends was organized the week we were there, and the camaraderie was as rich as the food. 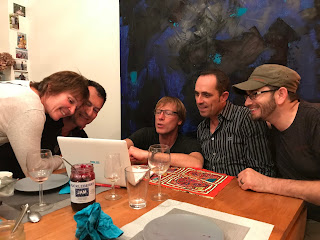 The kitchen table boomed with laughter as we all sat around Eric’s computer looking at his fly fishing adventures in France. A pictures flashed by with Eric standing in a trout stream, surrounded by beautiful leafy trees with an ancient brick footrace towering over the landscape in the background. I yearned to place myself into the photograph alongside Eric, surrounded by the majestic scenery.
“Ok, I have something to tell you...” Eric Bacon said over the laughter, while looking at me.
“Yes?”
“I did not want to tell you this before, due to the fact that it is possible it could not happen.” Eric continued. “I have been keeping track of the swells in the ocean and if they are small enough then we can go fishing for sea bass. And look at this...” On Eric’s phone there is a graph showing very low waves in the ocean. “This means, if you want, we can go fishing in my boat for sea bass. HOWEVER, it will not be fly fishing, and we have to be up in the morning at five a.m.” 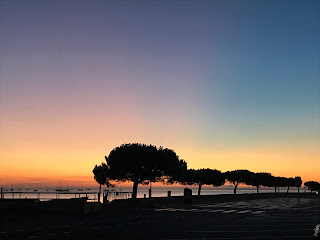 To think I would be so pretentious not to take up the opportunity to fish simply because it was not fly fishing is asinine. I am first an angler, and secondly a fly angler, so it was no surprise to Eric when I said yes without hesitation. 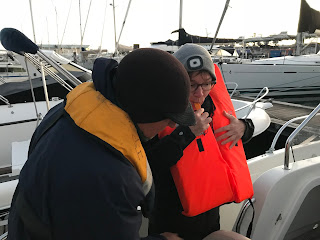 Also heading out with us to fish was Eric’s biologist friend Oliver and his wife Marie, 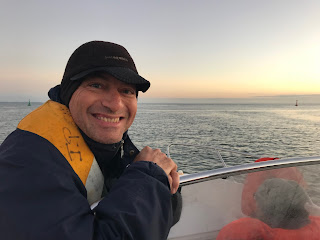 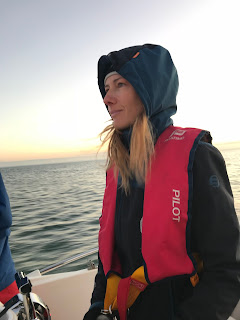 and, of course, me and Eric. 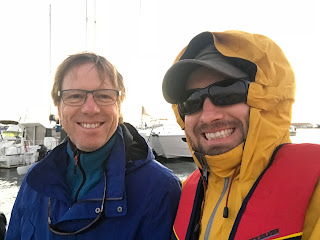 Eric’s boat rocketed through the smaller swells, and the bumpy ride took me back to my childhood boating days. We stopped at a spot where Eric had luck fishing before, and he handed me a heavy, ocean-ready fishing pole.
“Okay, I have a few rules when fishing on my boat.” Eric said, attaching a blue and white plastic baitfish to my pole.
“First, only one person casts at a time, and second, every time you make a cast you do it like this.” Eric put his finger securely on the fishing line and flipped the open faced reel to release line.
“Every cast you look behind and watch your lure as you cast, this way we know for sure we will not hook anyone in the boat.”  Waaaaah! Eric sent the plastic fish soaring from the boat. The white bate fish seemed to be floating in the air as it got smaller and smaller then splashed out of sight.
Eric gave me a small tutorial on different retrieves I could try to incite a fish. 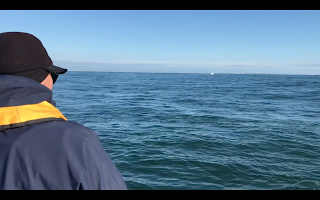 The stiff pole was nothing like a fly rod. You would think I had never fished in my life with the way I was working this pole; and here I thought spin fishing was supposed to be easy.  Off to my right I watched as practiced hands retrieved a lure like a conductor to the Boston Pops to entice fish. I tried to mimic his rhythms, but was far from harmonious.
“There’s one!” Oliver said in English, setting the hook and bringing in the first sea bass of the day. 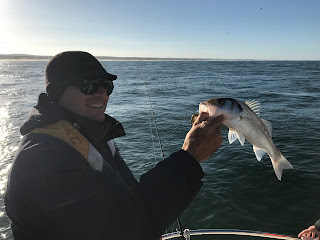 Oliver’s sea bass was over the size limit to keep, and keep it we did.
“Have you ever had sea bass?” Oliver asked me.
“No, I don’t think so.”
“It is a very good fish to eat, as long as it is cooked perfectly.  Lucky for us, Eric knows how to cook.”
“He does huh?” I said looking over at Eric who was smiling at the compliment.
“J’ai attrapé un poisson!” Said Violaine holding her pole high with a fish connected at the end of her line. I don’t speak French, but I do know the word "fish" in a few languages. Eric was at Violaine’s side in a flash while Marie handed him the net. 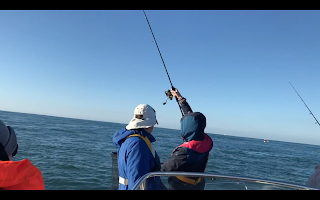 Violaine brought in two fish that there connected to her line; one was a keeper and the other we let go. Oliver was into another fish, but judging by the fight it was not going to be a keeper.
“Oh, I got a needle fish.” He said with a laugh.
I looked over to see it squirming so fast it looked like a silver snake at the end of the hook.
Oliver went to unhook his fish, but it had done it itself. The needle fish hit the armrest of the boat before it splashed back into the water, leaving behind a rainbow of small metallic scales. 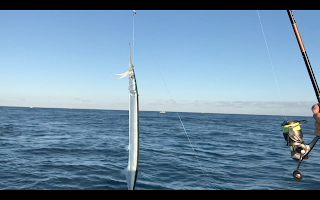 Eric rushed over with a wet rag and started scrubbing off the scales, almost working up a sweat in the process.
“The scales from that fish will stick to the boat if you let them dry. They would be almost impossible to take off if you don’t get them right away.” Oliver explained, as Eric started putting serious muscle behind each scrub. Even now the little scales were hanging on, but after a while none were left behind.
“There's one!” I yelled, but inside I was thinking, it’s about damn time I caught a fish.
Eric rushed to my side with the net ready, but then put it back after he caught sight of how small my fish was. 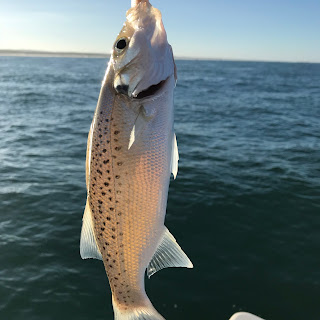 “That is a different kind of sea bass.” Eric said, “It is a smaller variety of sea bass, and this one is actually one of the bigger ones.”
“So does that mean we are going to keep it?” I joked.
“No! This would only be one bite.” Eric said back with a laugh.
I brought the little fish closer to me to unhook it, and wondered how I was going to manage this with three hooks in this fish’s mouth, all with barbs.
“Do you need help my friend?” Eric asked, laughing. I had placed my fish back into the water many times to let it breath, before bringing it back up again in another feeble attempt to remove the hooks.
Oliver spoke to Eric in French then they both looked at me and started laughing.
“I asked Eric if this is how you catch so many fish...by hooking one and throwing it back in several times.” Oliver said with a large smile.
To an experienced spin fisherman I must have looked like a toddler working this clunky ocean rod and, even worse, trying to unhook this minuscule fish. It was hard to stop laughing at my own expense, and Oliver wasted no time hooking into another sizable sea bass in the time it took me to release my fish. 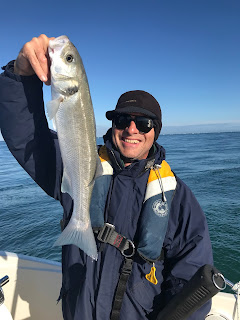 Catching had slowed down for everyone on the boat, and it was at this time when Eric’s other bass-fishing friend caught up with us on his boat. The typical French greeting was exchanged, and after I was introduced the language turned to English. It was nice to be included in the conversations, even though they were not talking to me. It was easy for me to figure out that if I was to live in France, these people would easily be my friends. 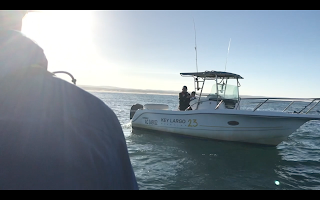 I was able to catch one of the last fish of the day, but it was still not a keeper.  After throwing it back I was almost rocked off my feet by a big wave.  Oliver yelled to Eric in French, and Eric ran to the captain's seat and fired up the boat.
“Hold on my friend!” Eric yelled.
As soon as the boat was on it roared to life with a punch of the throttle. Thank goodness I was holding on!
“THE WAVES ARE GETTING TOO BIG, THIS ONE IS A VERY BIG WAVE AND WE HAVE TO MOVE!” Oliver yelled to me over the roaring of the engine and the wind caused by our sudden acceleration.  We had just crested the big wave as Eric steered the boat head on into the wave. It was at this time when I realized how big this wave was. I looked down as we skirted the top of it, and it looked to be several boat lengths down. However this was not Eric’s first big wave. Quick maneuvering had us almost surfing the wave before we splashed down on the other side of it. Salty water soaked my face, and I gave a "WHOO!" with excitement.
Eric looked back at me, and saw I was smiling. “Yes, it is fun, but it is safer to get off the water.”
I didn't disagree. 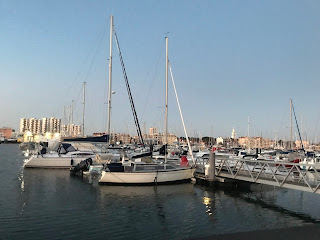 In no time we were back to steadier waters, which also meant deeper waters. We were fishing a shallow shelf which made the waves much bigger suddenly, Oliver explained. It was nearing the end of our fishing day, so it was also a good time to leave. As we docked the boat I thought it has almost been twelve hours since I have eaten a French macaron, and I was definitely due for a few more. And what a great treat to have after a day of fishing for sea bass in France. 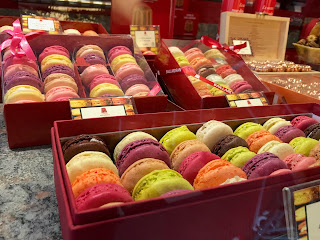 Posted by flyfishingboise at 3:05 PM